The U.S. Open at Chambers Bay looks mighty familiar to those that have bothered to study it! 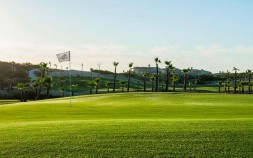 The immediate reaction on seeing Chambers Bay is that the winner will be the player who can create the most inventive shots, have the visualisation to hit it somewhere other than the target and let the slopes do the rest. This course is a big side-step from the hit-it-straight-or-bleed-out philosophy we have become used to at the U.S. Open.

Rory McIlroy said it rewards the big and brave off the tee, Tiger Woods was keen to stress the variety of options facing the player on every shot. The tall fescue grass is a first, as is the location; no U.S. Open has ever been played on the Pacific Northwest Coast. Weather will be a factor here, especially the wind.

Then there are the hollows, troughs, mounds, hills, slopes, backboards, swales and the odd unfair kick too. But what is a U.S. Open without a touch of unfairness? Pinehurst last year relied on luck when entering its waste/scrub hazards. This time round it will be elemental, Earth, Wind and…Fescue!

“This is a one-of-a-kind site for us at a U.S. Open, there is going to be some players that just love this ground game and love the imagination and embrace it. And then there are other players who just want predictability. They want something right in front of them.”
Mike Davis, USGA Executive Director.

This won’t be the first time a big event has been played here though. In 2010 the U.S. Amateur Championship was held here. It was won by Peter Uihlein who has, unsurprisingly gone on to forge a successful start to his professional career on the European Tour – clearly he knows a thing or too about windy, bouncy conditions!

The wind, the slope and the potential firmness of the bounce will favour a player who is used to the links courses of Great Britain and Ireland; there will be no hitting it high and stopping it on a dime (or should we say a sixpence?).

Uihlein’s approach to winning was key, involving picking a spot, using the contours and keeping the ball as low as possible. Which might give us an idea on who might have a good chance this year.

Last year’s Open Championship winner was McIlroy and he will still be many people’s favorite, but after an early exit on the links of Royal County Down in his self-hosted Irish Open, can he really tame Chambers Bay in the same way he did to Congressional? We might be better served to take a good look at the merits of wind specialists Sergio Garcia, who has a bagful of good finishes at the Open Championship or Rickie Fowler who won the Players. Both players pushed McIlory at Royal Liverpool last year, and both have the vision and the talent to do well again this week.

While the informed might opt for Masters champ Jordan Spieth, those with a feeling for the vagaries of links golf might think he could struggle this week. Then there is defending U.S. Open champion Martin Kaymer, who loves these newly-designed links challenges. His two major victories have come on windy, sandy-soiled tests at Pinehurst and Whistling Straights, if he’s in the mood this week he could dominate again.

Or could it finally be Phil Mickelson’s year?

What is clear, is that Chambers Bay will be a challenge to everyone teeing it up. It’ll be something they won’t have had much experience of, which was the point of Mike Davis when he suggested that players would be wise to get in early and do their homework, this type of course won’t come round often in the U.S. Open.